Will Run for Pasta

Enjoying books, brunch and coffee in the PNW …, and thinking of a blog name change.

Yippee Fri-Yay Mother F… oh shoot, this is a family friendly blog.  Might have to rethink that.

Happy Friday!!  And a bunch of thanks to those who commented/emailed/texted/hugged in response to my last post, it meant a lot!  Getting if off my chest here and also finally admitting it to Mr. Won’t Run has helped and it feels like a weight has been lifted.  I still have a ways to go but admitting it is the first (and hardest) step to climbing out of it.  Admitting to yourself, and others, that you’re in the depths of it is hard to do, even with those closest to you.  It’s not easy to explain, and it’s hard for people to really understand unless they’ve been through it themselves.  When they ask how they can help it’s hard to come up with an answer and that can be frustrating for both parties.  There are no good answers, but Mr. Won’t Run and I are formulating a plan to help me out of the hole, and he firmly believes “happy wife = happy life” 🙂

Happy wife will be in full swing tonight because we’re going to see Three Days of Rain and I am super excited!  Portland Center Stage puts on great productions, and their latest one stars two of the actors from the NBC television show Grimm!  I love the show and I love that the actors love Portland so much that they wanted to be part of a local production. #sashaandsilasshow  The Gerding Theater is a good sized theater but small enough to still feel intimate and everyone gets a great view so it’ll be a treat to see some TV favorites on the stage in person.  Throw in dinner beforehand with my man and that’s a great date night! 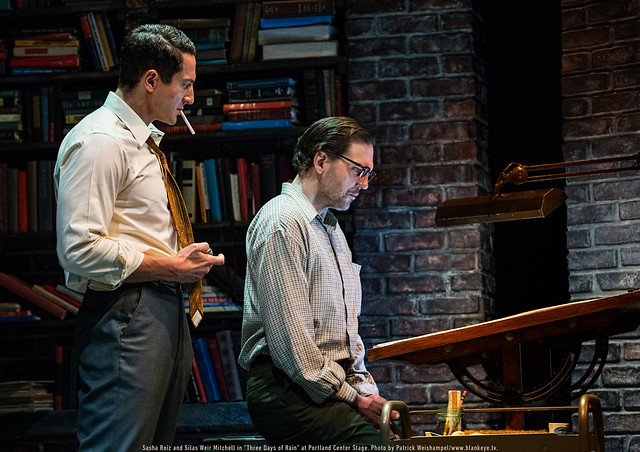 In other TV news…

I was thrilled to hear about the Jem and the Holograms moving being made, until I saw the trailer that came out last week.  This article, with a tweet from William Shatner, nails my thoughts on it!  The producer has said we should reserve judgement and that we’ll be pleasantly surprised, but I don’t have high hopes.

I freely admit that I watch too much TV, so much that at certain times of the year I’ll obsessively be Googling to see what shows are getting cancelled or renewed, and what new show pilots are premiering.  During a recent obsessive Google session, I found out that Forever has been cancelled and it makes me hate the world.  Why were more people not watching this show???  Yes, it was a cop drama and 90% of shows on TV are, but this one had just the right mix of a mysterious sci-fi background story, great chemistry between the lead characters with little glimpses of the romance that could be, and a quirky sidekick.  It was a familiar setup but still felt new and original which is hard to come by these days.  And if none of that intrigues you, then these two words are all it should have taken: IOAN GRUFFUDD.

How sad is this letter from him regarding the cancellation?  Makes me love him and the show even more!  I care so much that I actually signed a couple of petitions linked here to save it.  Who knows if it’ll work, but there are rumors that another network could pick it up or maybe it’ll get saved by Hulu (like The Mindy Project) or Netflix (like Longmire), but other networks won’t know it needs saving unless fans show an interest!

Speaking of Hulu and Netflix, since we have accounts with them we’re considering getting rid of cable and just using our Amazon Fire TV thingy to watch all the streaming stuff.  There are so many new shows that are exclusive to those networks (channels? streamers? what are we calling them?) that look good too!  Seems like a cheaper deal overall compared to cable.  Anyone else doing that?  Pros/Cons?

Any other Forever fans out there?  Are you mourning the loss of any shows like I am?  Please admit it so I know I’m not alone!

Going through the big D and don't mean Dallas. Or Divorce. It's the other D.

The Struggle is Real. Real Early.

The Struggle is Real. Real Early.